A Voice123 upgrade: simplicity and transparency

As the first online casting platform of its kind, Voice123 has indeed come a long way since it’s very humble beginnings sixteen years ago. I asked co-founder, Alex Torrenegra, quite recently how it feels to have created something that so heavily impacted the voice over industry — perhaps even changed its course completely.

“Do you ever think about it?” I nudged, almost jokingly.

He smiled. “Sometimes,” he said.

Tania Zapata and Alexander Torrenegra had recently married and had moved to New York City. Tania was working at Banana Republic as a sales associate. Alex was freelancing as a webmaster and online marketing consultant for multiple clients.

Tania wanted to become a professional voice actress and get herself heard on radio, TV, and in video games, etc. Initially excited at the prospect, they soon discovered how complicated the casting process for aspiring voice actors was. They learned that most clients and artists run into numerous middlemen trying to get in on the action: casting directors, managers, recording studios, paymasters, and, of course, agents. In fact, a so-called talent agent charged Tania almost one thousand dollars for a photo shoot to promote her. Apparently, being beautiful was a prerequisite for being a professional voice actor! The agent, of course, disappeared with the deposit and never delivered a single snapshot.

The power of the ‘Net

Over time, Tania and Alex realized that high-speed Internet could enable a website with simple algorithms to fully automate and replace the work of the middlemen. They envisioned a global marketplace that could almost instantly connect voice actors with potential clients while providing both aspiring and established voice actors with the opportunity to grow their professional careers. They launched Voice123 in 2003. Voice123 quickly became the largest-ever voice over marketplace.

Success came at a price, however: some casting calls were receiving upward of 700 auditions and this was becoming a source of frustration for everyone involved. To combat problems like these and several others that were surfacing frequently, Voice123 received its first major update in 2007 to better control and manage sheer volume.

Voice123 has never stopped growing. Over 250,000 voice actors are part of our community. We have processed millions of auditions. Thousands of artists in over 100 countries have either jump-started or successfully built their careers. We have connected them with clients of all sizes, including really big ones like Pixar, The History Channel, Electronic Arts, and Pandora.

It’s been over a decade since the last update came out. Technology has evolved substantially, but Voice123’s technology less so.

Our mission at Voice123 has always been to craft the future of the voice over industry. We’ve been listening to the community. We’ve been taking notes. And we’ve been working hard behind the scenes.

Today we are proud to release an upgraded Voice123! 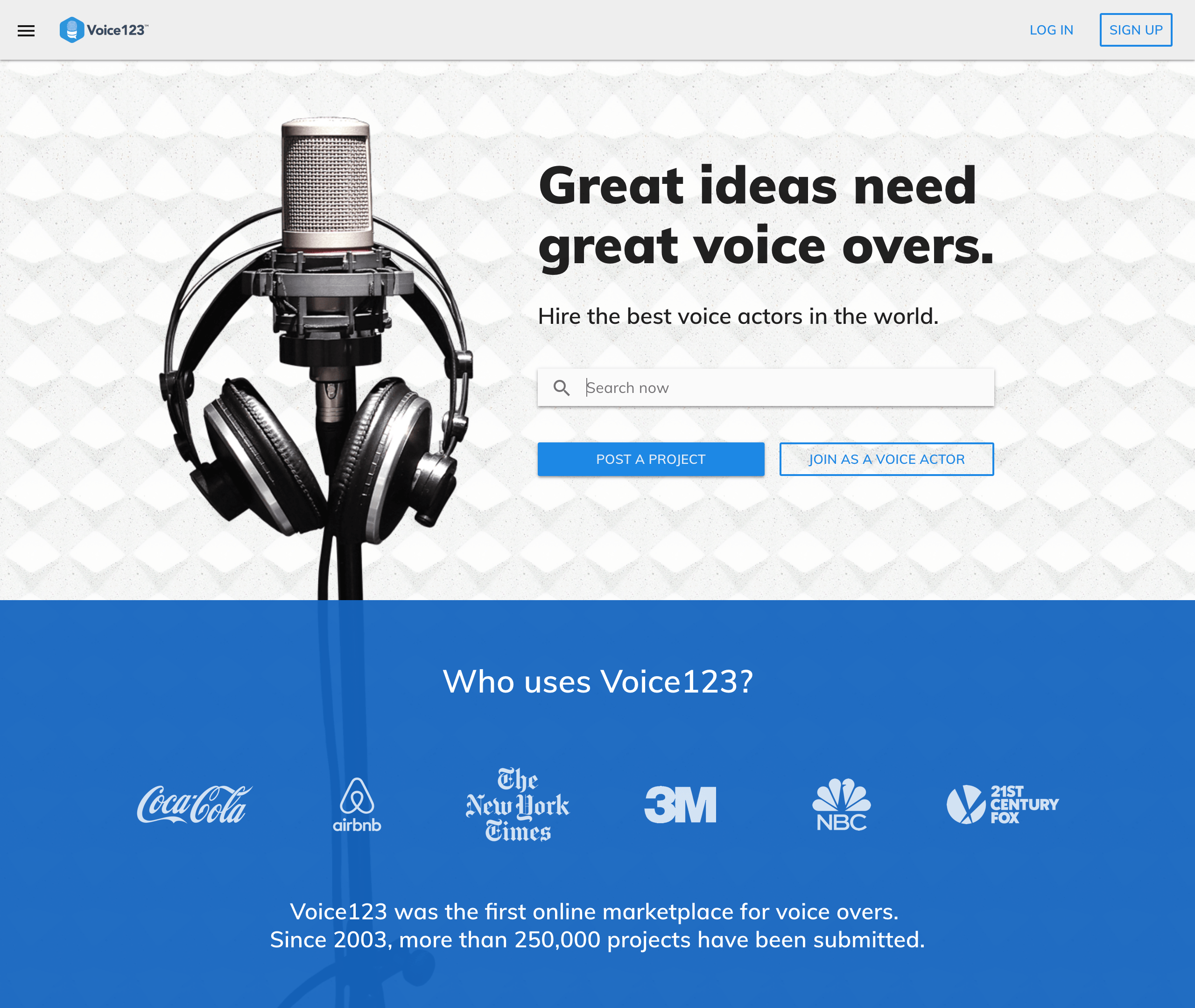 Behind the improvements are three fundamental principles; three keywords:

Because we are a digital platform, technology rules. It facilitates our being able to offer the best possible experience to every user of our platform. Embracing the remarkable technology we had available to us meant we had to rewrite the technology behind Voice123 from the ground up. So we did.

Throughout our rebuild, we asked ourselves questions like: What is the core mechanism behind this functionality, and how can we make it simpler? Driven by our pursuit of simplicity, we removed SmartCast and found a much more elegant way to match voice actors with projects.

We also focused on transparency. This is because Voice123’s purpose is to match clients with voice actors and allow them to build a lasting, creative relationship. We believe lasting relationships require honesty. So transparency is at the center of Voice123’s user experience.

Here are some of the most important improvements: 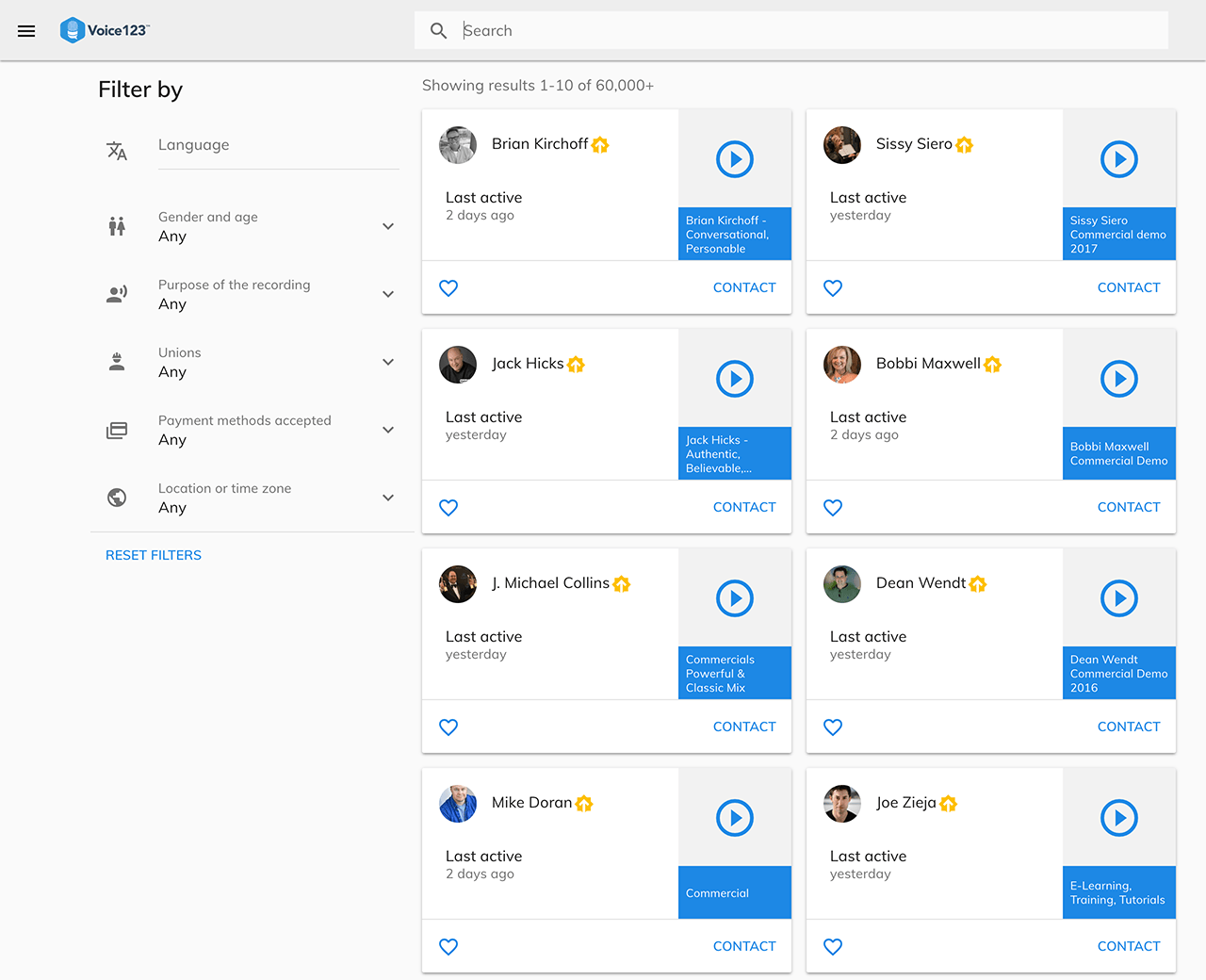 This makes it easier than ever for clients to find the voice they seek and contact the actor. It features a state-of-the-art keyword matching and machine learning. It’s blazingly fast and indexes every single sample voice actors upload. There is no limit to the number of samples that can be uploaded either. The new search indexes them all and helps clients find the most appropriate sample right when they need it. 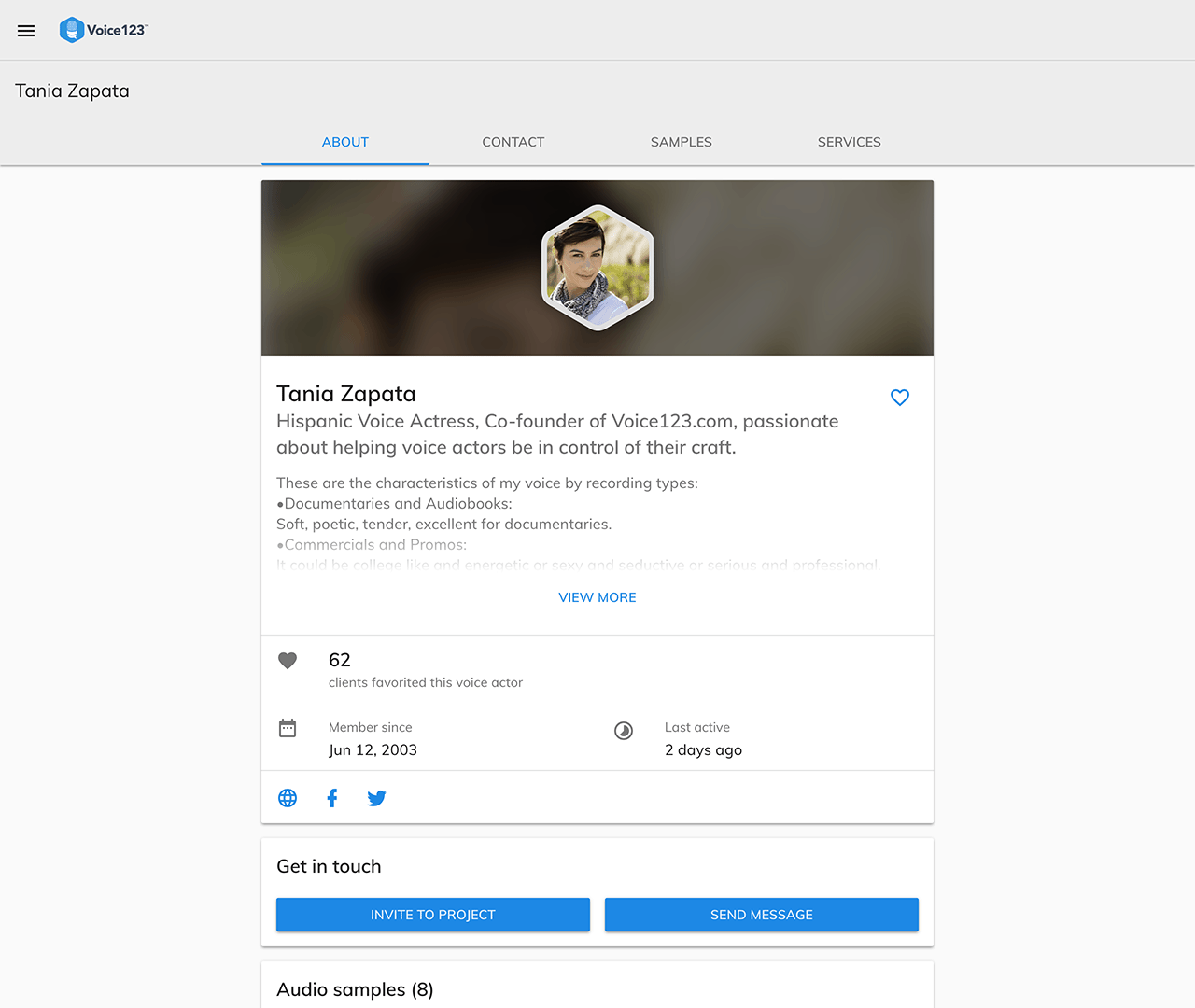 While voice actors often joke they have radio faces, we know they deserve profiles worthy of their likenesses and, more importantly, their voice samples! The revamped profile page takes care of that. It features new audio players in a design that’s both desktop and mobile-friendly, as well as a one-click functionality for clients to contact actors. It also allows voice actors to manage their collection of samples easily and update as well as preview their profiles.

SmartCast underpinned the previous version of Voice123. Its objective was to save clients and voice actors time by limiting the number of auditions received for a project. While it achieved its intended goal, its success brought SmartCast both praise and derision. Praise, because it was quite good at getting fantastic auditions into the inboxes of clients. Derision, because it used algorithms and math that were complex to understand — even for its creators.

The improved Voice123 changes all that. It doesn’t boost voice actors who audition less or penalize others who audition too often. From now on, when a voice actor receives an invitation, s/he is able to audition knowing that participating is not reducing the number of future invitations. Instead, the new algorithm prioritizes invitations based on how successful voice actors are at winning projects as well as taking into account their membership status. Voice actors with the best audition-to-winning ratio are invited first. This guarantees that clients always receive the very best auditions for their projects.

In addition, voice actors are able to see how they compare with others and why they rank where they do in the invitation queue.

Yes, it’s important for clients to learn about the voice actor they are contacting. By the same token, we believe it’s important for voice actors to learn about the potential client who’s hiring. As a result, the improved version includes a client profile that contains detailed information, such as the number of projects posted, the number of messages sent, etc.

Warning: tech jargon ahead. Voice123’s technology has been rewritten from scratch. We have not kept a single line of code from the old version. Our new tech stack includes some of the latest technologies. This enables us to experiment with new functionalities that are currently impossible to test. Some of our forthcoming experiments are bound to be ambitious as well as crazy enough to deserve their own release announcements. So stay tuned!

The future is now! The improved version of Voice123 is live for everyone to use. Access it right here.

My most heartfelt thankyou goes to a team of extraordinary people who worked tirelessly to make this update possible. They have been performing advanced wizardry for over a year: Andrés Suárez, Carlos Beltrán, Daniel García, Germán González, José Laya, Luis Perichón, Melissa Gaviria, and Santiago Aguilar.

rolf Follow
« Visual storytelling: 5 companies that excelled in 2018
Why using a pro voice over will strengthen your brand »

A brand voice: why having one is important

Halo: how to best expand your brand like the franchise!

How to do the best ever voice-over on TikTok